"Emerald Garden" - A Dreamy Image at Punchbowl Falls in The Columbia Gorge, OR

"Emerald Garden", a photo by Robert Park Photography on Flickr.
Via Flickr:
Emerald Garden is a dreamy image of Punchbowl Falls. The falls "are located in a very remote and deep gorge that is filled with snow melt waters coming from Mount Hood in the Cascade Range. This image was captured in early summer using an exposure lasting nearly four minutes, which created an ethereal smooth glow to the water that trickled away from the falls. Located at Punchbowl Falls Oregon© Robert Park www.robert-park.com/
Posted by Unknown at 9:53 AM No comments:

"Emergence" By Robert Park http://www.robert-park.com, a photo by Robert Park Photography on Flickr.
Via Flickr:
"Emergence"
The canyon’s shadowy walls combine with beams of sunlight that penetrate the canyon and often create scenes of unbelievable and surreal natural beauty. As the day goes on, changing light angles create a kaleidoscope of patterns,abstract scenes and colors. This area of Antelope reminds me of a sunrise sky with mesas and buttes rising on the horizon with the suns rays.Located at Navajo Nation Antelope Canyon, Arizona. © Robert Park www.robert-park.com/
Posted by Unknown at 10:04 AM No comments:

"Dawn of Time" Death Valley National Park, California."By Robert Park, a photo by Robert Park Photography on Flickr.
Via Flickr:
Dawn of Time was captured on the 1st of January 2010 as a winter storm cleared leaving behind trace amounts of water in the Bad Water Basin of Death Valley. It was taken on one of my ritualistic treks to Death Valley for New Years. Dawn of Time was conceived several years prior to its actual creation; however, I had to wait for the right conditions in order to capture it. On my New Years 2010 trip to Death Valley, I had waited several days for a storm to clear that allowed the shallow lake you see in the image to form. I needed to have a smooth wind-free morning, so the lake would be like glass and give the reflection that I had pre-visualized. On the last day of my trip the storms cleared and the sunrise was spectacular with pink ribbons running across the sky, casting beautiful pink and magenta hues on the foreground and illuminating the Panamint Mountains as the sun came over the horizon. I positioned myself where the water recedes allowing the geometrical forms of the salt pan to poke through the shoreline of the shallow lake. Finally, I had the proper conditions that would give me the color, values, contrasts, and drama that I required in my pre-visualized image. Location: Bad Water Salt Flats in Death Valley National Park, California. © RobertPark www.robert-park.com/
Posted by Unknown at 9:35 AM No comments: 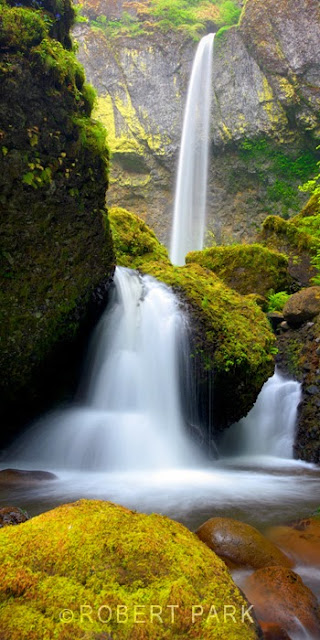 "Mystic Falls" By Robert Park http://www.robert-park.com, a photo by Robert Park Photography on Flickr.
Via Flickr:
These falls flow year round, but are best in the late winter and spring, like many others in the area. The cliffs on either side of the falls are flanked with the colorful yellow-green lichen found throughout the Columbia Gorge, adding a lot to the aesthetics of the scene. The falls are usually said to stand 289 feet tall, however repeated visits led us to doubt the validity of that figure. At certain places along the trail to the falls its possible to see Elowah and a part of Upper McCord Creek Falls in tandem, which could have possibly led to the idea that it was one series of waterfalls. Turns out the USGS had sent a survey team to determine the height of the falls in 1916 - their efforts produced a height of 221 feet. We measured the falls in 2009 to be 213 feet tall, so the only way the height of 289 feet could have materialized is if Upper McCord Creek Falls were included. Along the trail to both Elowah and Upper McCord Creek Falls can be seen several sections of old cast iron and wooden pipes which were used to flume pressurized water water to the Crown Willamette Paper Company mill along the Columbia River. Elowah Falls is a very nice 289ft waterfall situated in John B. Yeon State Park towards the eastern end of the so-called waterfalls area of the Columbia River Gorge.Located at Columbia River Gorge © Robert Park www.robert-park.com/
Posted by Unknown at 9:32 AM No comments: